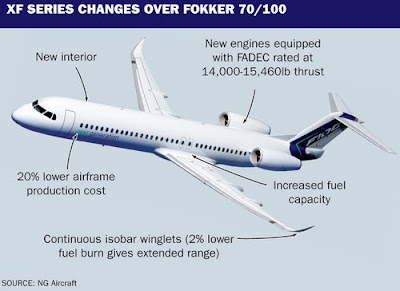 Entrepreneurs behind the long-running effort to develop a Fokker 100 successor intend to modify an existing airframe this year, after securing financing from the Dutch economics ministry.The organisation driving the programme, NG Aircraft, is a successor to the Rekkof company which has pressed for years to restart Fokker production. NG Aircraft says that the economics ministry is to provide a €20 million ($27 million) loan - although this still needs European Union clearance.This funding would come through the Dutch SenterNovem agency, which became part of the ministry's innovations support arm Agentschap NL this year.SenterNovem has a civil aviation department which funds pre-competitive work, such as design, simulation and tooling, for the creation of non-commercial prototype aircraft.Grants of up to €10 million are available for aircraft transporting fewer than 100 passengers, or €20 million for other cases.Under an initial phase NG Aircraft will begin adapting a Fokker 100 with new systems and engines. The twin-jet will serve as a demonstrator for the proposed Fokker 100 NG, the first example of which the company wants to assemble by 2015.NG Aircraft director Jaap Rosen Jacobson says that the loan shows that the company's plan is "realistic", adding: "This is one step, on a long road, but an important one."He is confident that the loan decision will obtain European clearance in June, after which the company will detail its programme and begin the modification work.NG Aircraft has taken up offices at Amsterdam's Schiphol East zone with a team of engineers. It says it has been working on the aircraft design for 18 months, insisting that there has been "persistent demand from the market" for the Fokker successor and that the modernised jet would be a "formidable competitor".
Fonte: Direto da Pista.
Photo by: Flight Global.
Postado por Unknown às 22:26