Qantas 767 aborts 700 feet above tarmac and wheels up 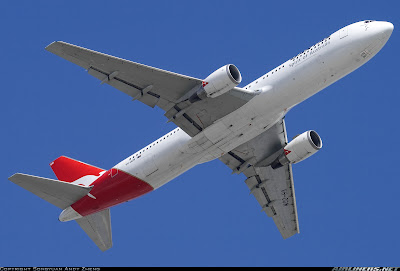 Qantas has stood down the pilots at the controls of a Boeing 767-300 Cityflyer service which last Monday aborted a landing at Sydney when its ground proximity warning system indicated that the wheels hadn’t been lowered.

The 254-seat jet was descending through 700 feet, or very close to landing, when the electronic voice of the GPWS said “too low gear”.

The pilots had seconds earlier realised the undercarriage hadn’t been lowered and initiated a go-around procedure, hitting the throttles hard and cleaning up the wing just before the synthetic voice sounded its warning.

The jet, on a flight from Melbourne, continued to sink toward the runway after it had descended below 700 feet, before responding to the thrust and control surface changes and climbing away from the runway for a normal approach and landing.

Just how close it came to hitting the runway wheels up will be determined by the ATSB investigation. ATSB has listed the matter as a “serious incident”.

A Qantas spokesman said this morning:

This was an extremely rare occurrence but one we have taken seriously. The flight crew knew all required procedures but there was a brief communications breakdown. They responded quickly to the situation and instigated a go around. The cockpit alert coincided with their actions. There was no flight safety issue.

The incident was reported to the ATSB and the pilots were stood down. We are supporting the ATSB’s investigation and our own investigations will determine what further action might be warranted.


In fact a quick search of the accessible data bases found no comparable instance of a modern jet being flown by any airline wheels-up on approach to an airport so low that this specific GPWS warning was triggered.

Go-arounds are infrequent but certainly not rare at Sydney Airport because of other aircraft not clearing the intended runways as fast as expected, or because of deteriorating visibility or concerns about wind shear.

For airlines and their pilots such rejected landings are routine and trained for. But a wheels-up configuration on an approach like that flown by the Qantas Cityflyer last Monday is another matter. It was rare, alarming and should properly be the subject of a searching inquiry, including an examintaion of what the Qantas spokesman refered to as “a brief communications breakdown”.
Fonte: crikey.com.au
Photo by: Songyuan Andy Zheng.
Postado por Unknown às 12:02